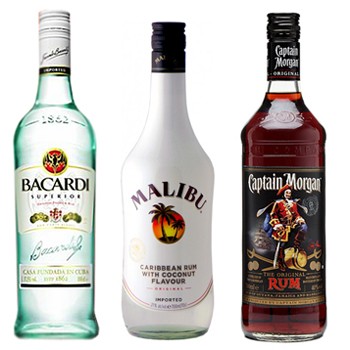 Rum, possibly our favorite liquor. What can’t you do with rum, really? Rum cake, rum punch, rumchatta, rum balls. The list goes on, and with an endless array of types and flavors it’s easy to see why the rum seems to be the first liquor to vanish at most parties. Rum is simply a distilled liquor made by fermenting and distilling various forms of sugarcane. Its how it’s distilled and what’s added to it that makes each style of rum unique.

White Rum – This is probably the rum most commonly used in cocktail recipes. Also known as “light” or “silver” rum this is a typically light-bodied rum, and about as neutral as rum gets. While it can be aged and filtered to remove the color, it doesn’t have to age at all to add a kick to your drinks.

Gold Rum – You might also see this referred to as “amber” rum, this is the middle ground between white and aged rum. With a flavor that stands out more this is a rum you can sip on its own or over ice. When adding it to cocktails keep in mind that gold rum can stand out against stronger flavor profiles.

Dark/Aged Rum – this is rum that packs a powerhouse of flavor. Made from molasses that’s been caramelized dark rum is typically aged longer in rich charred barrels. This bold drink does well on its own over ice, but you’ll also find it in a lot of culinary confections. It’s deep color and rich spiced and caramel notes lend itself well to cooking, especially sauces for desserts.

Overproof Rum – if you’ve ever had a flaming drink this rum was likely featured. It is well above the standard 80 proof and can go up to 160. Its high flammability has made it more difficult to get ahold of, but if you can, proceed with caution. It doesn’t mix well, but it does great gently floated on top of a drink and for some pyrotechnics. Seriously though, that’s a move we recommend leaving the flames to a SOBER professional.

Flavored and Spiced Rum – the name probably sums up this rum. But some key pointers you should know is that darker the spiced rum is -generally- the higher quality it is. The dark rums are usually aged longer and mingle well with the added spices, flavors, and caramel.

Blackstrap Rum – This rum’s unique name pales in comparison to its unique color. It is distilled from blackstrap molasses, a dark and super thick molasses produced by a third boiling of sugar cane juice. Its super dark color and intense flavor makes for a dramatic drink.

Rhum Agricole – this rum hales from the French West indies. It is made from the freshly pressed juice of sugar cane and typically left unaged. Rather than caramel notes people tend to find this drink grassy and herbal.

Cachaca – hailing from Brazil, like Rhum Agricole it is also made from freshly pressed juice and has a similar flavor. If you get ahold of a bottle of this you absolutely must try your hand at making Brazil’s national cocktail, the Caipirinha.

Not sold? Go ahead and take a peek at what else we have to offer on our main DIY Cocktails page. Like what you see? Check out this link to rum gifts to Canada, or use the drop down to search rum gifts in every country.